One of our criteria for selecting recipes is something that’ll be fun to eat with stuff we like. Tater tots? We’re there!

If you’d like to try out the recipe, you’ll find it here.

Our own variations can affect the overall recipe. Here are some of our choices for consideration. 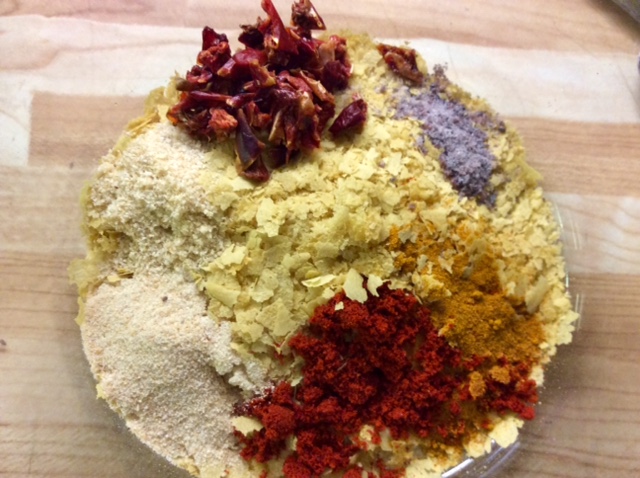 Skyla: I’ve experimented a lot with tofu scramble recipes and did not end up using the Edgy Veg one but this one. My own variation on it involves smoked paprika rather than the regular kind and a teaspoon of dried red bell pepper flakes.

Although you can fudge the amounts a little, some of them you want to be pretty precise, like the mustard. Too much and…the whole thing just tastes like mustard.

I also made a smaller amount because I’m just feeding me. The tofu scramble reheats well but it’s better to start with fresh tater tots for the rest.

The sausage I used was Yves Mediterranean Harissa Veggie Sausages. The cheese was a cheddar from a company called Earth Island in Canada but known actually known as Follow Your Heart elsewhere.

Dina: I know next to nothing about tofu. I made a vegan dip with some silken tofu once (and believe me, I had no idea there were different types of tofu) and it did not end well, for me or the tofu. I know I love the little cubes of it in the miso soup I get at the sushi place, and that’s about it. When I first read this recipe, I raised a very dubious brow.

Though I am sure Skyla’s version is delicious (and a lot less fuss), I did use the Edgy Veg recipe for tofu scramble (Florentine style). The sausage I used was Beyond Meat’s Beyond Sausage Brat Original. The cheese I used was Follow Your Heart Mozzarella Shreds. I did see both their cheddar and pizzeria blend versions, but decided on the mozzarella for this recipe. The tofu I used was Wildwood Organic Sproutofu (what?) Firm.

Skyla: I’ve been making something similar to this for a while now, although I use hashbrowns in place of tater tots and Yves vegan bacon strips in places of sausage, so I already knew what to expect. Tater tots, of course, make everything better.

I used a small cast iron pan instead of a casserole dish and only made enough tater tots for one, but combined with the scramble and sausage, I found it very filling and only ended up eating about half. 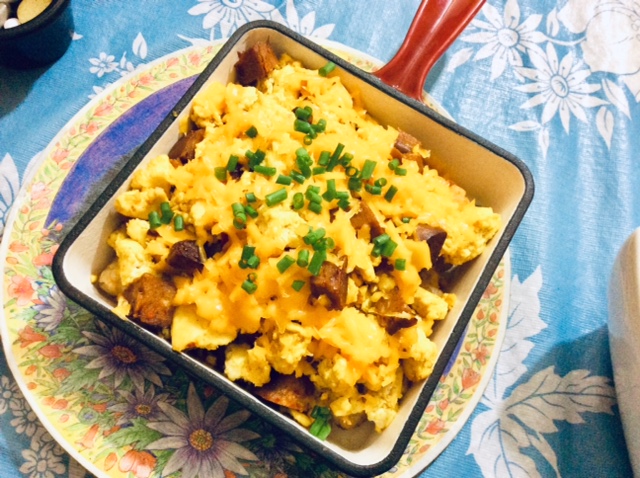 If you’re only feeding one or two people, it’s probably best to cook the tots (or hashbrowns) as needed–the scramble keeps very well in the fridge for a couple of days. The only need for the oven at the end is to melt the cheese, so a small ramekin would also do.

Dina: So I followed the recipe nearly to the letter. I have a habit of doing that the first time I make something, then fiddle with it the next time if I feel it needs tinkering. The only thing I did differently was add some of my beloved salt to the cooked tater tots when they came out of the oven, because I like my tots salty. 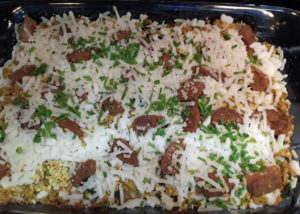 I can honestly say I enjoyed this meal. It was simple enough to make, required very little prep (though honestly for me it was more spoon-consuming as it was my first time and I had no idea what to do), and was delicious. It has all the ingredients you need for a well-rounded meal, and if you make the whole portion like I did, there’s plenty left over for additional meals — a bonus for all you Spoonies out there. Every now and then I would get a bite of the melty mozzarella and it was wonderful. Edgy Veg uses the phrase “Carnivore Approved Vegan Recipes,” and I can honestly say, as a carnivore, I approve of this recipe.

Skyla: I kind of feel like this recipe would be forgiving of a subpar vegan cheese because it’s such a mix of flavors. The Earth Island/Follow Your Heart is actually a very convincing American cheddar, but something like Daiya would probably be okay in a pinch. Edgy Veg also suggested a cheese sauce she offers a recipe for, which would do.

Also, I didn’t do the hollandaise sauce. I’ve never had the actual egg version–it’s very unappealing and I don’t really like eggs–so I didn’t bother with the vegan version and can’t say what it would/wouldn’t add to this recipe. YMMV

Stay tuned for Dina’s “making of” post, wherein a carnivore learns about tofu.