Dina and I are planning our next joint recipe, we’ve just hit a busy patch–I had holidays last month, she has holidays this month. While you’re awaiting that, I thought I’d do our first product review.

A few weeks ago as I strolled through the grocery store, an end display of popcorn drew my attention. I saw the bright orange that says CHEESE. I am trying my damnedest to eat vegan, so I kept on going…when a little word on the bag drew my attention. 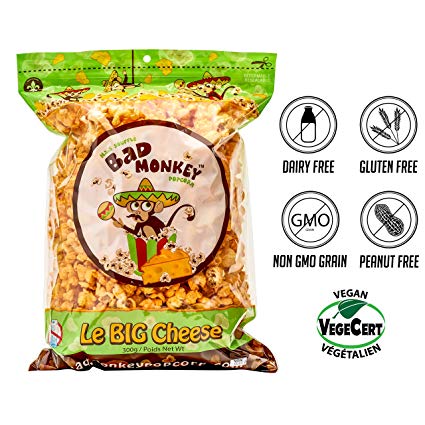 Vegan cheese popcorn? For real and for true?

I wasn’t familiar with the brand so I did a bit of reading–apparently it’s a Canadian thing, and you’d probably find it more readily in bigger grocery stores. In my small town, we’re pretty limited. So maybe this is a product you’ve heard of, or maybe it’s not, but it was new to me.

First thing’s first, and I still can’t believe I’m saying these words but…there was too much salt.

I know, I know, I’m the person who adds salt to salty food. There is no such thing as too much salt. But initially I did find them too salty. (I adjusted after a bit.)

The most important thing: does it tasty cheesy?

It was sufficiently cheesy, yes, at least compared to cheese popcorn in general. Though it’s nacho cheese it’s not spicy and doesn’t have heat. If you’re also someone who prefers heavy seasoning, this’ll be for you. The popcorn was fresh and bag was resealable, so I ate it over a few days.

I liked it well enough that I went back to get more, but they were out of cheese…

Yep I got ketchup. I think it’s a Canadian thing? This is a Canadian company, so that would be why ketchup was one of their flavors.

It did taste like typical ketchup flavouring, which likely doesn’t have dairy in it so isn’t hard to make vegan. I would still like more cheese ones just to see if it was merely an overly salty batch or if they’re all like that, but I’ve yet to find it in stock again.

So, do I recommend Bad Monkey vegan popcorn? Yep! Just prepare for a bit of extra salt.

I would love to see a white cheddar version–I love Smartfood.

*Disclaimer: We are not paid or offered any kind of compensation to review recipes or foods. We’re reviewing stuff we’ve bought on our own. If you’re a company and would like to give us stuff to try with our honest opinion, let us know!